How can historical reenactment establish a dialogue between the present and the past? And how does such reenactments fuel emotions in the contemporary political debate about the US-Mexican border? 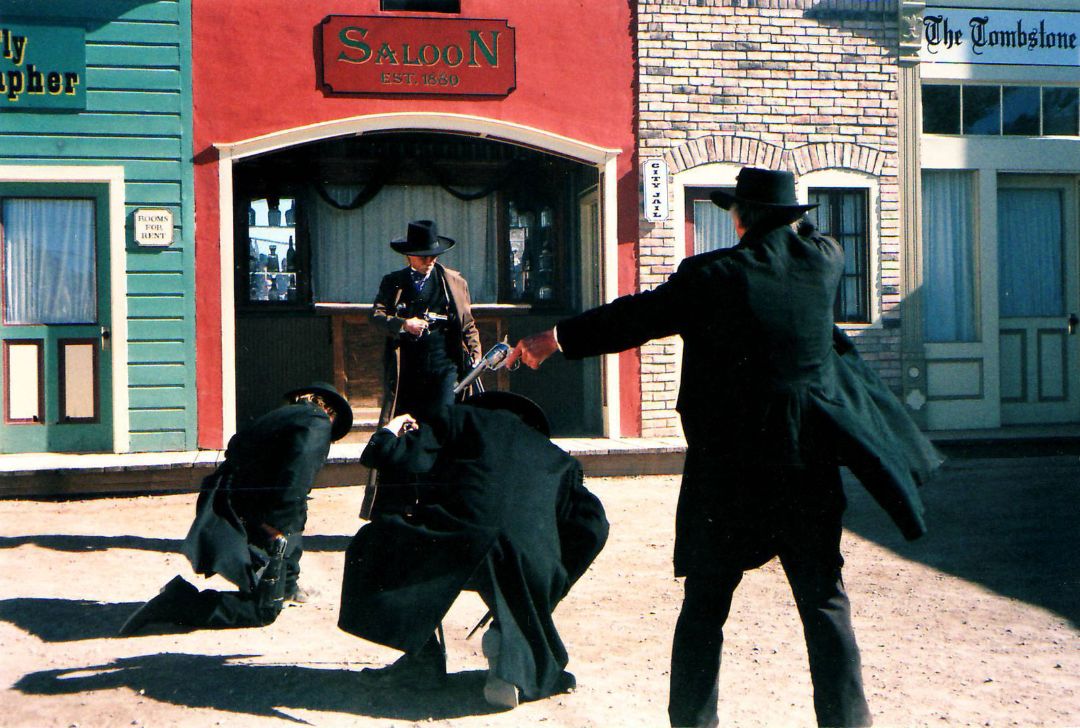 Valeria Luiselli is a Mexican living in the United States and a writer for The New Yorker. In the summer of 2014, at the height of the immigration crisis that was seeing scores of unaccompanied children from Central America arriving at the border, she travelled with her family to Tombstone, Arizona, home of the world-famous reenactment show, ‘The O.K. Corral’. The show recreated a confrontation that led to a shootout between a group of outlaw cowboys and the town’s lawmen, the result of which saw lawlessness defeated by lawfulness.

The reenactment left Luiselli feeling uneasy. Why do these people get to have a name in history while others remain an empty category? Why are some identities—in this case, cowboys and law enforcers—mapped into history and others mapped out?[i] Luiselli returned the following year to the Southwest seeking answers. There she found “a space where the past had been replaced by a peculiar, repetitive, and selective representation of the past”. More troubling, her travels in the area confirmed her suspicion that there is a clear connection between places that glorify and commodify a violent frontier past and the violence that was so frequently being directed against undocumented immigrants. It was no singular coincidence that a reenactor in one of the gunfights performed in Tombstone was also a leading voice calling local citizens to arms to protect their border ‘in a time of war’. Vigilante and civilian patrol groups have guarded the frontier for as long as it has existed; the difference is that the perceived enemy is no longer the ‘savage Indian’ from within but the ‘illegal invader’ from across the way.

Luiselli walked away from her research concluding that the Wild West reenactments and the myths that fuel them reveal the emotions driving the response to the ‘border crisis’, and conversely, that the civilian border militias shed light on some of the myths behind reenactment culture. The celebration of the founding of white America is not confined to the past events. The practice lives on in a kind of real-life reenactment with very real consequences, in which the reenactors are civilian border patrollers—people who feel that they have a duty to do whatever they can to keep others, and especially non-white others, out of America. The vigilantism rests not only on a myth about America’s frontier past—a place that needs to be guarded by guns and walls—but on a perceived affinity with those original protectors. It is an affinity not of the kind that comes from having shared values and principles, but from a common emotional response to a perceived threat.

The Limitations of Affect

Luiselli’s example exposes the dangers of basing historical reenactments on emotional engagement, an approach that has gained currency in recent years within history’s so-called affective turn. According to Vanessa Agnew, reenactment is a “form of affective history” that “both takes affect as its object and attempts to elicit affect”. Iain McCalman and Paul Pickering observe that “reenactment in some variant has become the most widely consumed form of popular history”, an appetite that Maja Mikula attributes to a preference in contemporary society for immediacy and personal experience. Indeed, as the editors of a Reenactment History book series state confidently at the outset, common to all forms of historical reenactment “is an attention to the details of physical, emotional and psychological experience rather than the sweep of large-scale historical processes or structures”.[ii]

Such privileging of emotional experience over historical structures allows historical reenactment to fall prey to the kind of abuse witnessed by Luiselli in the U.S. Southwest. The key point for school history teachers is that they and their students should attend first and foremost to the historical context in which the subjects of their reenactments lived. Attending to this historical context entails much more than accurately depicting its physical details—it is much more than “the past dressed in funny clothes”.[iii] It is an investigative process that can draw connections between the way in which human beings construct meaning from their sociocultural as well as physical environments. Rather than coming face to face in Tombstone with a continuity of emotionally fuelled prejudice, Luiselli and her family could have seen how rival groups perceived each other, had those perceptions tested against conflicting experience and left with some appreciation of the world that generated those past beliefs and actions, as well as how those worldviews endure in the present.

Reenactment has long been associated with the philosophy of history of R.G. Collingwood. On the one hand, Collingwood’s seeming appeal for ‘sympathetic identification’ with the past has made him a spokesperson for the kind of affective history that this article calls into question.[iv] On the other hand, if any one aspect of Collingwood’s thought has been more criticised, it has been that he overlooked affective elements in conceiving history as a fundamentally intellectual exercise. Both views are misguided and overlook the fundamentally critical and dialectical character of reenactment.[v]

A lifelong opponent to psychologistic conceptions of historical thinking, according to which historical understanding involves recapturing the psychic essence of mental events, Collingwood maintained that historical thinking involves untangling the knots that connect the past and the present in ways of which we are mostly unaware. Every society, including our own, operates on sets of tacitly held assumptions that supply meaning and truth to human belief, thought and action. Moreover, Collingwood made clear that past thought is always rethought in a context of present-day thoughts.[vi] That is to say, reenactment operates on a principle of methodological self-awareness: reenactors enter into past frames of mind while holding up that thinking self-consciously as an act of thought about another person’s act of thought, and it is seeing this contrast between both acts that allow the past thought to be held up to analysis and criticism. Collingwood believed that history as reenactment offered humanity a fuller conception of the human mind and its possibilities for deliberate and purposive action in the present. This is the political philosophy at the heart of his philosophy of history.

These elucidations point to the importance of reflexivity in reenactment and, more importantly, raise the issues most at stake in educational practice. The message for educators is that the practice of reenactment should deal explicitly with the nature of reenactment itself, by which I mean that activities involving reenactment are not in any direct sense ‘about' the events being reenacted; rather, they are about modern-day activities inspired by our interest in the past. They are as much about the present and our present-day interests as the past being reenacted. Reenactment as historical pedagogy possesses the valuable quality of being able to foreground this present. As we attempt to recreate a scene from the past, a fuller picture of the structures underlying our own realities comes into view, untangling the knots linking past and present and so providing a productive counterpoint to our view of the past. Such “denaturalisation of the present”, reported so frequently by reenactors after prolonged exposure to different ways of life, is a necessary first step in any social-critical inquiry.[vii] If proceeded by further investigation, it can yield substantial insight into the nature of human life past and present. It can also help us to critically rethink the concepts and narratives transmitted through popular culture and all-too-frequent political misuse.

Rather than trying to relive past emotional and psychological states, attention could go to identifying the conditions that made it possible for people in the past to think and act as they did. Of course, a historical reenactment will always be a performance, and there is no escaping the need to accurately depict the past in all its physical details. Yet if educators are to avoid creating spectacles that, as Luiselli witnessed near the U.S.-Mexican border, operate on a basis of emotional affinity with an apocryphal past and it is living out in the present, they will need to draw in the wider conceptual environment that gave meaning to past forms of life. Historical thinking and understanding are so often challenging precisely because it requires us to reconstruct chains of reasoning from premises that we know from our vantage point to be false. The real feat of historical thinking and understanding, it might be said, consists of imbuing these premises with a truth that supplied past systems of belief, ritual, thought, and action with their meaning. Reenactment becomes the investigative process of both recognising and playing out the truth claims of past forms of life. But it does so only by foregrounding the present and so bringing us into a more intimate dialogue with the tacitly held assumptions that govern at a preconscious level so much of what we say and do.

The educational potential of historical reenactment consists largely in the way that it foregrounds and denaturalises the present in entering into dialogue with past forms of life. Present-day beliefs and convictions are formulated in concepts that presuppose a historical lineage, and the historical study of this lineage often necessitates a reassessment of one’s present-day beliefs and convictions. Embodying the affective elements of past people’s lives provides no entry into this shared conceptual language. An inside view of history is more than seeing the world from the standpoint of the people who lived in the past; an inside view is knowing how it was possible for those people to see the world in the ways they did, and thereby understanding their actions that from our present-day vantage point so often strike us as strange. To act freely and transformatively in historical reenactment is to move purposively within the bounds defined by the past form of life. Identifying these bounds is the investigative work of historical reenactment.

[i] Valeria Luiselli, ‘Staging the Frontier. The Wild West Meets the Southern Border’, The New Yorker (June 10 and 17, 2019), 32–41. The O.K. Corral reenactment sees the law enforcers Wyatt Earp, Doc Holliday, Virgil and Morgan Earp fight the outlaw McLaury and Clanton families. For further information on this and other Tombstone reenactments, visit: http://www.ok-corral.com

[v] See Tyson Retz, Empathy and History: Historical Understanding in Re-enactment, Hermeneutics and Education. (New York: Berghahn Books, 2018); and Tyson Retz, ‘Why Re-enactment is not Empathy, Once and for All’, Journal of the Philosophy of History 11 (2007), 306–23.

McCalman, I. (2007, September 17). Past not just the present dressed in funny clothes. Sydney Morning Herald. https://www.smh.com.au/national